Davinia Rodríguez will be Lady Macbeth at the Parma Verdi Festival 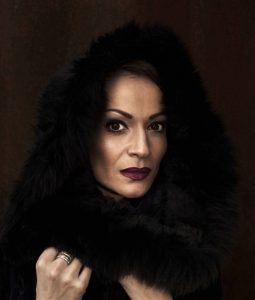 -The Spanish soprano will return to Italy with Verdi’s Macbeth

Once again the Canary Island soprano Davinia Rodríguez has agreed to take on one of the great challenges in the career of any singer of her register: the role of Lady Macbeth in Verdi’s Macbeth, one of the most complex and difficult roles in the soprano repertoire. What’s more, she will be doing it at the most important event dedicated to the Italian composer, the Parma Verdi Festival.  Rodríguez made her debut in the role in 2016 at the Theater an der Wien in Vienna alongside Plácido Domingo as Macbeth.

These performances will take place after a season full of new characters and music, highlights of these include her performances of Liù in Turandot (Macerata Festival, Las Palmas Opera in Gran Canaria), Marguerite in Faust (Modena, Reggio Emilia and Piacenza in Italy), Thaïs (China National Centre for the Performing Arts in Beijing), Verdi’s Requiem  (Palau de la Música Catalana in Barcelona), Nedda in Pagliacci (Royal Opera House of Muscat, Oman) and a concert of opera arias with the Tenerife Symphony Orchestra in Adeje (Tenerife).

“With Lady Macbeth you have to give it all you’ve got,” the Spanish diva explains, “as with any other role, but the truth is that this one demands absolute commitment on a dramatic level as well as on a technical and vocal level. That is why it is so fascinating. With this character Verdi created one of the greatest roles in our repertoire and that is why I am happy to be able to perform it in Parma, a city which has some of the most expert and knowledgeable audiences when it comes to Verdi operas.”