– The Canary Island soprano will once again take on the role of Amelia Grimaldi in Simon Boccanegra in Naples after an opera gala in Tenerife and before performances in Modena, Reggio Emilia, Piacenza, Barcelona and Muscat.

August 2017
The Spanish soprano Davinia Rodríguez’s career continues to develop and be consolidated on the international circuit. Over this last year she has taken her talent to theatres in Barcelona, Spoleto, Naples, Vienna, Turin, Bilbao and Lisbon, among others. This summer she has returned to the Festival dei due Mondi in Spoleto to make her debut in the role of Donna Elvira in Mozart’s Don Giovanni. She will also perform in the emblematic Sferisterio Macerata Opera Festival where she will once again take the role of Liù in Puccini’s Turandot, a role which she already took in 2014 at the ABAO-OLBE in Bilbao and which she has programmed in upcoming seasons in various European opera houses. On the 1st September she will travel to La Laguna (Tenerife) to perform in a concert alongside the Tenerife Symphony Orchestra, conducted by Riccardo Frizza, and she will share the stage on this occasion with the tenors Celso Albelo and Badel Albelo, who are also from the Canary Islands. Later, Davinia Rodríguez will return to Italy to take the role of Amelia Grimaldi once again, in Simon Boccanegra at the historic Teatro San Carlo in Naples; it was with this Verdi opera that she made her debut at the Gran Teatre del Liceu in Barcelona last year, alongside Plácido Domingo, having also sung the role in Modena and Piacenza. She will give three performances in Naples on the 8th, 11th and 13th October in a Turin Teatro Regio production conducted by Stefano Ranzani and directed by Sylvano Bussotti.
Upcoming engagements in 2017-18 will include her debut in the role of Marguerite in Gounod’s Faust on a tour of Italy which will visit the Teatro Comunale in Modena, the Teatro Municipale Valli in Reggio Emilia and the Teatro Municipale in Piacenza, as well as a debut at the Palau de la Música Catalana in Barcelona with her first Verdi Requiem and at the Royal Opera House Muscat, in the Sultanate of Oman, with her acclaimed Nedda in Leoncavallo’s Pagliacci. 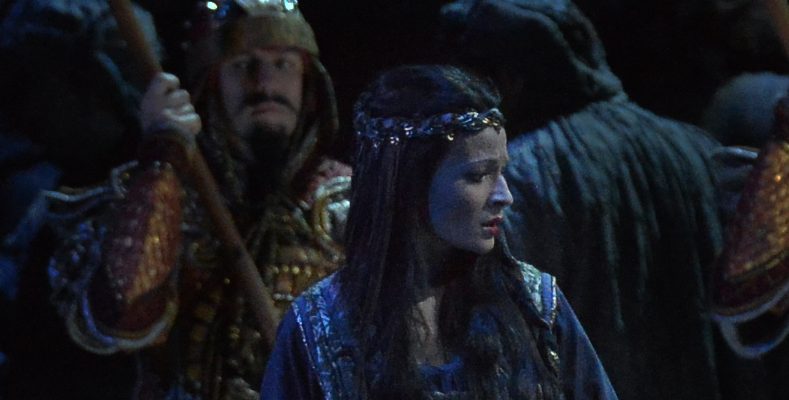 Davinia Rodríguez will be Liù in Macerata

-The Canary Island soprano will sing Liù (Turandot) once again, this time at the Sferisterio Opera Festival in Macerata

July 2017
After her success with audiences and critics in her debut of Donna Elvira (in Mozart’s Don Giovanni) which marked the opening of the Spoleto Festival dei Due Mondi, the Spanish soprano Davinia Rodríguez will go back to one of her best-loved roles, that of the slave Liù in the Puccini opera Turandot. It will be this summer at the emblematic sphaeristerium at the Opera Festival in Macerata (Italy) on the 21st and 29th July and the 4th and 13th August. The Italian festival will open its programme for this year with a new production of the masterpiece by Giacomo Puccini, directed by a duo formed by Gianni Forte and Stefano Ricci, who will both be entering into the opera world for the first time. Davinia Rodríguez, who first took the role of Liù some seasons ago at the ABAO-OLBE season (Bilbao), will this time share the stage with Iréne Theorin (as Princess Turandot) and the tenor Rudy Park (as Calaf), among others. Pier Giorgio Morandi will conduct. The soprano, who was born in Moya (Grand Canary), will begin her next season in October with a return to the Teatro San Carlo in Naples as Amelia in Simon Boccanegra.